Patong Beach is located on the west Coast of Phuket. It is the most famous of all the Phuket beaches and it has the most tourists. Patong has turned from a quiet fishing village into one of the island's two main cities. Mainly due to the development of tourism, the Patong Beach has seen a huge increase in the number of restaurants, pubs and bars, tour and travel agencies. Additionally, a lifestyle shopping complex, Jungceylon, has opened and offers more international goods and brands in air-conditioned mall. There are also the usual endless night markets popping up at sunset along both sides of the beach road, turning the whole of Patong into one lively market.


The well known bay and the about 4 kilometer long beach are often referred to when tourists are going to Phuket for their holidays. Accommodations range from budget guest houses to five-star hotels and resorts. Many pubs and bars offer live music. Motorbike, paragliding and jet-ski rentals are widely available on the beach.

Nightlife is centered around Soi Bangla (Bangla Road), but can be found all around in either shape or form. Both the north and south end of the bay are however quieter and more family friendly. Patong Beach is ideal for swimming as well as water-sports. The key to full enjoyment of the place is to pace yourself, drink lots of water and learn the meaning of 'mai pen rai' - which translates roughly to 'It doesn't matter' or 'Don't worry, be happy'.


ForTaxi – For Rent A Car With Driver : Patong Beach


This south-westerly facing beach - named after a nearby Muslim village - has managed to remain exactly the same as it has been for years in spite of intensive urbanization in the direct area. It's still tranquil and a haven for people who like peace and quiet.

Khao Khat is eight kilometres east of Phuket Town and covers the west coast of Cape Panwa. Its sand is rather rough and the water shallow but it's certainly very scenic with views out across Chalong Bay and Lone Island. Luxury villas and condominiums line almost the entire beach but dotted in between are fishermen's huts and at the far west end of the beach there is a mangrove swamp. Except the facilities reserved to the guests of the Novotal Panwa Beach Resort, there are very little facilities on Panwa Beach (Khao Khat).


You can rent a long tail boat to visit Koh Lone just a few minutes ride across the bay. During high season a small wooden shack sells few beach accesories.


ForTaxi – For Rent A Car With Driver : Panwa Beach


Nai Harn is one of the island's most popular places with in-the-know locals. This relatively tranquil place has only a few hotels including The Royal Phuket Yacht Club and is a popular anchorage for boats during the high season. 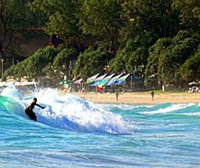 Great for swimming from November to April, care should be take in the low season (May-October) when there can be strong undertows,making swimming dangerous. Regular bus service to and from Phuket town during daytime. Nai Han is just south of Kata Noi and north of Promthep Cape, Naiharn is not Phuket's longest beach, but it borders the most gorgeous lagoon on the island. The middle of the beach is dominated by the Samnak Song Nai Han monastery, which has obstructed excessive development and is the reason that the beach is generally less crowded than other spots on the southern part of the island. A wide variety of water sports can be enjoyed, but swimmers should be alert for the red flag which warns of dangerous currents during the monsoon season from May to October. One can walk to nearby Promthep Cape to observe sunsets, which are often fiery and spectacular.


ForTaxi - For Rent A Car With Driver: Nai Harn Beach


Nakalay BeachNakalay is app. 5 minutes from Patong and occupied by only one resort which covers the whole bay - The Thavorn Beach Bungalow. It is suitable for people who like it quiet but still want to be near the entertainment area of Patong.


Mai Khao Beach is situated on the northwest coast of Phuket this 11km, straight beach is still blessedly undeveloped as it is part of the Sirinat National Park and the only significant constructions along it are the JW Marriott Phuket Resort and Phuket International Airport near Nai Yang Beach.


'Mai Khao' means white wood in English and maybe this is a local joke because there are certainly no white trees along this beach! The sand is a little coarse, perhaps the coarsest in Phuket, but this is splendid isolation at its best and you can walk for kilometres without seeing anyone at all.


There is a sharp drop off into the Andaman Sea, making swimming dangerous from May to November. If you are a plane spotter, the beach just north of the airport offers great vantage points from which to spot the incoming air traffic.


For Taxi - For Rent A Car With Driver: Mai Khao Beach

Rawai holds the distinction of being the very first tourist beach on Phuket. Years ago, people from Phuket Town would drive the 17km to Rawai on weekends to while away the afternoon underneath the beach's casuarina trees rather than risk the (then) dangerous drive over the hill to Phuket's west coast.Nowadays Rawai is a 'working beach' and a launching point for day boat excursions out to Phuket's surrounding islands. Many longtail boats available for hire line its shores, where you can arrange a trip to Coral Island, Koh Lone or Racha Island,or a fishing or snorkel trip. The beach is also used as a mooring point for the many fishermen who live in the area. Rawai is home to the five-star resorts, Serenity Resort and Mangosteen and quite a few of Phuket's foreign expat population live in the area, lending a bohemian and laid-back flavour to the way of life there. Favourite nighttime haunts are Friendship Beach, towards Chalong, and Rawai's beachfront bars.

For Taxi - For Rent ACar With Driver: Rawai Beach

Surin Beach Evergreen trees rim this small, curving bay beneath the foothills north of Kamala. Surin is home to Phuket's first golf course , a nine-hole course laid out more than sixty years ago during the reign of King Rama VII. It is now largely in disuse except as a park. The steep incline of the beach, turbulent water, and big waves make Surin a dangerous place to swim during the rainy season. The beach is mostly frequented by Thais and the locals on weekends and on the southern end you can find some small snack and souvenir shops. Beach chairs and umbrellas can be rented there. Surin is most famous for its breathtaking sunsets. Located at the end of Sri Sunthon Rd., the road running west from the Two Heroines Monument, 24 km. from Phuket Town. Accomodations and restaurants are nearby.


For Taxi -For Rent A Car With Driver: Surin Beach


Separated from the mainland of Phuket by the Khlong Tha Chin, a shallow mangrove swamp, this twenty square kilometer island is connected by a causeway to the city. Wat Ko Sire, on the hill, has a large Reclining Buddha and provides fine views of the surroundings. Phuket's largest settlement of Sea Gypsies, or Chao Ley, are on Ko Sire at Leam Tuk-kae. Swimming is not present because of the muddy bottom. There are some popular seafood restaurants on the eastern shore. The westin siray by resort & spa is located in this area on hill side.