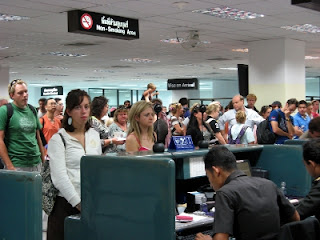 Tourists arriving at Phuket Airport are well-accustomed to long waits at the immigration-clearance counters. Photo: Gazette file
The Commissioner of the Thai Immigration Bureau has announced that a new automated entry system will be installed at all airports in the country, including Phuket. The system will allow passengers to enter the country without having to endure long immigration lines.

The technology, called “Advance Passenger Processing” system, or “APP”, will be installed at all international airports in Thailand within two years, Lt Gen Wiboon Bangphamai told a meeting of Asean immigration chiefs at the Hilton Hotel Phuket Acadia Resort and Spa yesterday.

“The APP system will shorten the immigration clearance process. The system will allow people to just walk through without having to stop to get a stamp [in their passports] or other details checked,” he said.

“The APP system is not ready to use at the moment. We still have to settle the agreement with AoT [Airports of Thailand] about an extra fee that may have to be charged when the system is in place.”

The APP system will also be used to check departing international passengers bound for Thailand to see if their names are on the Thai Immigration blacklist. If they happen to be on the blacklist, or are wanted on an outstanding arrest warrant in Thailand, the person who first notices such details could report them to local police for possible arrest, he said. 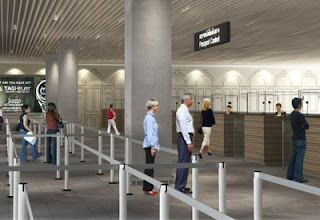 An artist's impression of the immigration arrivals queue after the expansion project at the airport is complete. Image: AOT

“It’s not that we don’t already have the system [enabling immigration officials to perform their tasks effectively]. We do, but what we have is not good enough,” Lt Gen Jate said.

“The Asean Economic Community (AEC) will take effect in 2015. That means many more people are expected to travel to and from Thailand. Therefore, it is necessary for all Asean countries to be able to exchange information with each other,” he explained.

“We want to develop the system because there will be a lot of people coming to Thailand. We don’t know who will be coming through our region; that is why we want to develop a proper system in order to avoid any problems that might arise.”

“Our worst fear is that criminals or terrorists will come to conduct activities or use this region to hide out. Even though there are not that many cases at the moment, we don't want to take a chance,” Gen Jate said